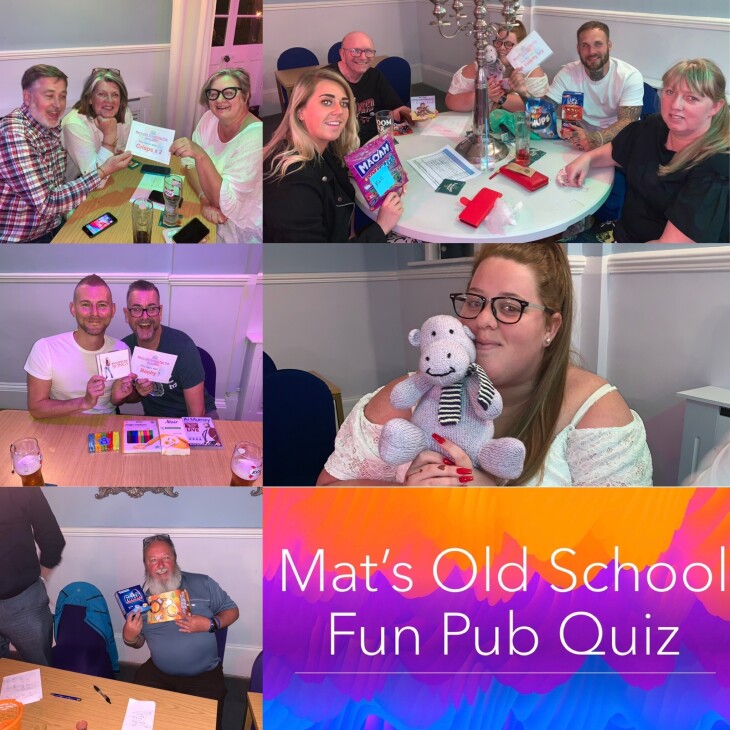 It then went History then Bingo with Ready to be released winning the first line with 54 balls, then the second line with 64 balls and won some wax strips and magic markers then the full house went to big fact hunt and win the al Murray DVD and bubbles which they swapped for a bag of sweets🤩 we went straight into general knowledge, knobs or knockers which no one won so we did it again and ready to be released won the DVD and bubbles 🤩

Play Your Cards Right, higher than a boob job, lower than a worms tit, £101 was carried over from the previous 4 weeks, then the pot went up to £123, Its not an entrance it’s a back door won both tickets out of the hat but alas the pot was not meant to be won! As this is week 5 next Monday will be week 6 and if it is not won then 50% goes to the Alzheimer’s society 🤩

Then it was a little bit of Rock Paper Scissors, ken Dodds dads dogs deeply looking for a b!tch on heat won the handcuffs 😳and then to end the quiz was the lovely music round of music that was shazamed off Magic Radio 🎶 🎼 🎵

The winners were: as there was only 4 teams everyone was a winner, well big fact hunt with 47.5 points came 1st and the other 3 teams were all joint 2nd😳 so we asked 5 more questions, then another 5 and the scores were…….the famous 2p and glass of water were taken out first lol
4th place (last), ken Dodds dads dogs deeply looking for a b!tch on heat and won some dishwasher tablets 🤩
3rd place, Ready to be released and won booby prize 1 which was the housework double cd 🤩🤩
2nd place, It’s not an entrance, it’s a back door and won 2 packets of crisps 🤩🤩
1st place goes to Big fact hunt and won the cute little hippo knitted by Jean 🤩🤩

There will be a quiz next Monday which will start at 7:30pm and there may be a football question or 2 with the tables being ready from 7pm, tables must be booked by sending us a message 🤩🤩🤩

Fee is £2 a person to play with lots of amazing prizes to be won and of course lots of fun to had by all.

Monday to Saturday 11am-11pm, Sunday 12pm-10pm, these times are not set in stone and may change due to how busy/quiet we are.

Our good value lunch menu will be served each day from 12-2pm. We will also be serving bacon rolls from 12pm each day until they are sold out and we will be serving pizzas until 9pm each night.

All of our food is freshly cooked and prepared in our scores on the doors 5 star rated kitchen.